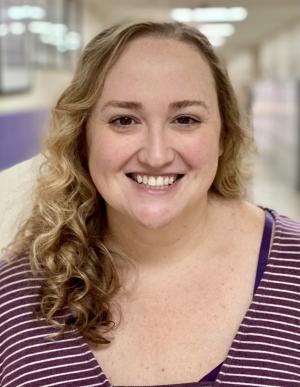 The most important things that Dr. Rippy learned in her time at OHS center around people and academics. “Learning the, you know, how to have good relationships with teachers and other students. You know, a lot of that will carry you through. As far as academics, I do feel like I was very well prepared by the classes that I took here. Whenever I went to college, I was ready. I was actually ahead of my classmates as far as the things I had been taught and learned in high school.”

Among her favorite high school memories are making ice cream in “makeshift homemade ice cream makers that we made in class,” watching Mrs. Suit throw pure sodium in water and watching it explode, and doing funny things with her friends. One of her favorite memories with friends was when she and her friends took all of another friend’s books out of her locker and replaced them with Folgers Coffee Crystals. The prank was a play on Folgers’ 1980s commercials where they attempted to market instant coffee as just as flavorful as high-quality brewed coffee by secretly switching it out with coffee in high-end restaurants.

For students considering becoming doctors, Dr. Rippy encourages them to take lots of science, math, and English classes. She also encourages students who are interested in the medical field to know what they are getting into by shadowing or interviewing practicing doctors. She said that medicine is a long and expensive educational process.

“If you get done [with school] and you don’t like it, you know, you’re kind of stuck because you have all those loans to pay back and you’ve committed all this time. I know that that’s happened to people.” She said that although the golden age of medicine has passed, the advancements in technology and medications are awesome.

She said that her greatest professional accomplishment is her relationship with patients. “That’s the big thing.”

Despite living in Fayetteville and Little Rock, Dr. Rippy chose to come back home to Ozark. “Our family is here. That is the biggest draw...then, we [her and husband Mark] had happy memories growing up here. We both liked going to school here...we were ready to live in a smaller town — have more, more yard and less neighbors.”

Dr. Rippy was valedictorian of her class and a National Merit Scholar, and she was on homecoming courts a lot — a feat that required loads of decorating in her time.

One notable event from her time in school was when she was on a Future Business Leaders of America trip in Tulsa. As a part of the trip, they went to the mall. She and her friends were walking and talking and laughing through the mall like typical teenage girls when they noticed the shopkeepers’ grim looks and hushed voices. They soon realized the shopkeepers were listening to the radio as reporters told the breaking news of the Oklahoma City bombing. Other major events that she remembers from her school days are Operation Desert Storm and when the Berlin Wall came down.

Dr. Rippy said that some people might not know that she is an adrenaline junkie. She enjoys extreme activities from bungee jumping to parasailing to rock climbing to snow and water skiing. However, she admits that she is “too old now” for most of those activities. If she had unlimited resources she would travel everywhere but space.

Her parents, Kaye and the late Dr. James — known by Jim or Doc — Robertson had a profound influence in her life. Her dad was a local dentist and musician and her mom was his office manager and is an artist. “They definitely always expected me to do well in school. That was a huge focus at home. I always had that accountability...they would help me too [with school work] if there was anything I was struggling with. I think that made a huge difference.”