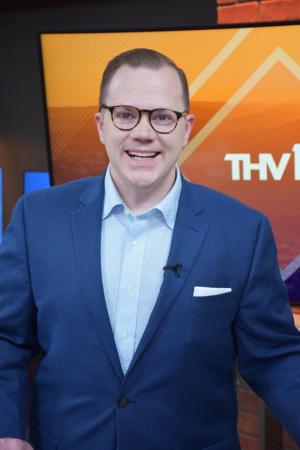 Skot is an OHS alumni who wears his Hillbilly heart on his sleeve. “There are very few things I am more proud of than being an Ozark Hillbilly...that’s something that I will always be proud of and wear as a badge of honor is that there are a lot of really good things and great people that come from Ozark, and I will just never be ashamed of that,” said Skot.

Skot is currently chief of staff for Arkansas State Auditor, Andrea Lea, and a part-time meteorologist for THV11 in Little Rock. At the end of March, he will leave his position with Lea’s office to work full-time for THV11 as the morning meteorologist.

In his time at OHS, he was in Future Business Leaders of America, played tuba in the Hillbilly Band, and was his class reporter. He also competed in the National FBLA conference in website design.

“At every step of the way, I had teachers—some of which are still teaching there, some of which have only recently retired—who saw potential in me that I was unable to see. And I never understood why they invested so much time into little ol’ me. But now I am so thankful that they pushed and saw potential and tried to open my eyes to what the world has to offer…they saw a vision for me that I wasn’t able to see...I will forever be thankful for those teachers who spent that time—especially when I was stubborn because God knows that was often,” said Skot. Among OSD employees who impacted him, Skot mentioned Bill Gossage, Ann Guthrie, John Suit, Cindy Kramer, and Tina Smith.

Even in high school, weather was a passion of Skot’s. Despite it being against school rules, he carried an alphanumeric pager that gave him severe weather updates. “I kept it in my backpack and I would find a way to, like, secretly slide it out so that I could see if there was a tornado watch or what was going on,” said Skot. This was before the advent of smartphones, so it was the only way for him to keep up with severe weather. “I was on the leading edge of technology, but it was against the rules, so I had to hide it,” said Skot.

In 2019, Skot flew into the eye of Hurricane Dorian. Measurements taken on this flight upgraded the storm to a category 5. He explained the surreal peace that he experienced in the eye of the storm. “I think about that storm actually almost every day—probably every hour—and when life gets tough, it’s difficult, there’s a lot of turbulence. In the middle of the storm, there is going to be some peace. You’ve just got to know, you’ve got to hold on that you’re not going to crash. You are going to make it into the eye of the storm. You’re going to catch your breath. You’re going to know what to expect getting out of the storm and you’re going to be able to make it,” said Skot. He said that flying through Dorian was easily the coolest thing he has done or will do, but he is still sobered by the 200 lives that were lost in the storm.

By way of advice to students, he encourages them to be present. “There’s so many opportunities within the high school or within the community that you can totally miss if your head is in TikTok,” said Skot. He said this with no judgment. “Let me just tell you I am addicted to TikTok. I am. I’ll happily admit it, but there’s so many good learning opportunities, ways to give back...You’ve got to look up,” said Skot.

“If a student reads this, and they’re interested in weather or politics or news, I will always do whatever I can to help ‘em if they say that they are a Ozark Hillbilly. So, if that’s someone’s dream, I am a text message away from doing whatever I can to be your biggest advocate you’ll ever have,” said Skot.

He is a graduate of Arkansas Tech University and Mississippi State University. He lives in Maumelle with his golden retrievers, Reagan, Bush, Stormy, and Cooper.