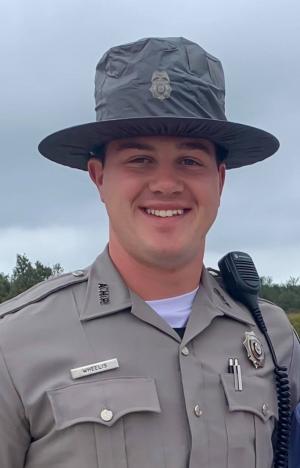 If you have ever used IDrive Arkansas to check road conditions, you have benefited from the work of OHS Alumni, Officer Austin Wheelis. He is employed by the Arkansas Highway Police, not to be confused with the Arkansas State Police. The highway police are responsible for enforcing the rules of the Arkansas Department of Transportation, and they have state and federal jurisdiction while focusing on commercial motor vehicles.

When he applied for his job there were 586 applicants across the state. He was one of 25 hired from that applicant pool. His selection is especially significant because he is the youngest ever hired.

“I’m not just out here writing tickets, I am out here making a difference...that’s why I went from being a math major to doing this,” said Austin. He said that he knew he could make a difference as a teacher, but “that just wasn’t where my heart was.”

Austin understands what it is to live a life that is turned around. He says that he is a goofball. In high school, this characteristic helped him pull off a senior prank that cost him his spot at the state track meet. He uses his life story to meet people where they are and help them understand that they can change.

He said that OHS athletics are the only reason he went to college. The football scholarship that he earned as a result of his participation in our athletic programs gave him that opportunity.

The most important thing that he learned at OHS was to be his own person. “No matter what’s going on back home you always know that you can be your own person at school...if you have your mind set on something you can get done at school--whether it be academically or sports--that you’re in full control of that...that made me a responsible person…” said Austin.

His advice to students who would like to enter law enforcement is to be willing to be responsible,  to be able to think fast and still follow policy, and to be patient.
Most people do not know that Austin is a self-described softy. He said that people expect him to be really tough because of his job, but the truth is that he enjoys spending time with his wife Samantha watching THE BACHELOR. He has a 10-month-old daughter named Blakely. In his free time, he enjoys hiking, camping, kayaking, and traveling.

His favorite memory at OHS was his senior year when he played quarterback and the Hillbillies shutout the Booneville Bearcats 26-0. It was the first time that his class ever beat Booneville and the first shutout win against Booneville since 2000.