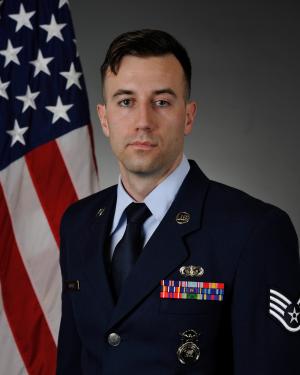 Staff Sergeant Ty Morris is a combat arms instructor who is stationed at Ramstein Air Base in Germany. Regardless of how far away he lives, his hometown is still close to his heart.

When he gets leave, he makes sure that he schedules it during football season so that he can come home for Hillbilly football games. “Friday night high school sports, there’s nothing like it down south. I’ve lived all over the US since being in the military and...you don’t realize it [how good Friday night football is] until you’re there,” said Ty.

To him, the most notable people in his time at OHS are Mrs. Farmer, Mr. Jenkins, Mrs. Kramer, Mr. Highfill, and Coach Coleman. “Mrs. Hopper [now Mrs. Kramer] was the guidance counselor at the time. She helped me tremendously,” said Ty, “I spent a lot of time in her office trying to find some purpose.”

He said that Coach Coleman, former OHS history teacher and baseball coach now Ozark Middle School principal, shared wisdom with him. Coach Colman’s wisdom continues to inform Ty’s leadership. “There’s a few times that even being 10 years out of high school, there’s certain times whenever I am leading my troops now that I’m like, that sounds like some Coach Coleman wisdom,” said Ty.

9/11 happened when Ty was in the third grade. When he was in high school the only popular social media platform was Facebook, and pant sagging and wearing basketball shorts under jeans were the big fashion trends for boys.

He spent the majority of his high school career heavily invested in sports. His senior year, he was on the OHS track and field team. However, he had an injury that changed the course of his life. “I always thought that that was what I would, you know, I was trying to get a college scholarship to play anything really that I was good at, and then I ended up getting hurt and now I was completely reliable on my academics, and they were not great,” said Ty.

After graduating from OHS, he attended Arkansas Tech University - Ozark Campus. Then, he transferred to Arkansas Tech University. “I went there all the way up to junior year and kind of lost direction...I left college,” said Ty. He moved back to his family’s farm in Cecil. A year later, due to the influence of his grandfathers who served in the military, he enlisted in the Air Force.

Ty holds an associate’s degree in criminal justice from the Community College of the Air Force and is working on a bachelor’s degree in homeland security and emergency management.

His advice to high school students is to live in the moment. “When I was a senior—well a junior and a senior—everyone, you know, pushes—you have got to know what you’re about to do. You know, and, I think that we push kids now so hard to like, you have to know now what you want to do for the rest of your life, and like make a decision at 17, 18 years old for the rest of your life. Like, what! I was 22 coming into the Air Force, and I didn’t even know what I wanted to do. And so, enjoy the time that you have in high school. It’s literally going to be the best that you’ve got,” said Ty.