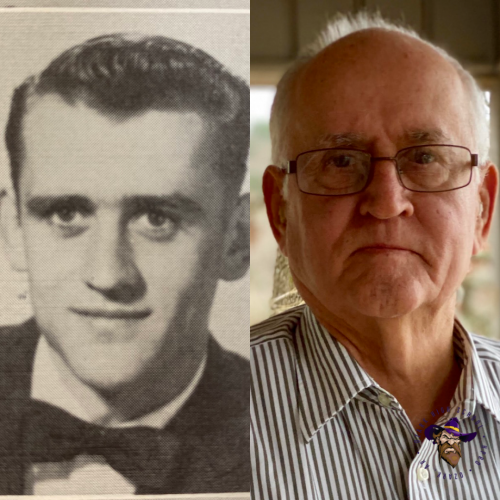 The way that Lonnie C. Turner styles his name is a direct reflection of Ozark School District’s influence in his life. When Turner was in about the 11th grade, Edgar Woolsey, superintendent of OSD, called him in to talk.  “He said, ‘Turner, I don’t have time to review everybody’s transcript, but I’ve got two things to say to you.  Number one, you don’t have enough math, and number two, you need to pick a way of signing your name and stay with it for the rest of your life,’” said Turner.  So he picked Lonnie C. Turner and stuck with it.

He graduated in 1962, and there were 40 people in his graduating class.  This was smaller than the average class size at Ozark High School, due to the large number of men who were overseas during World War II. The baby boom happened just after Turner was born.

While in high school, Lonnie was the president of the student council and the FFA chapter, as well as being an active member of 4-H and playing baseball for one year.  In Turner’s time, baseball practice was after school like it is now.  After practice, Turner would hitchhike home to Turner Bend.  One day there was no one to hitch a ride with, and he walked more than 15 miles home.  That walk home was the end of sports for Turner.

Turner’s early life was defined by major historical events like school integration, the Bay of Pigs Invasion, the Cuban Missile Crisis, the acceleration of the Vietnam War, and the assassination of President John F. Kennedy.

Reflecting on his time at OHS he said that honesty, gaining the ability to think and reason, learning how to show respect, and developing a drive to help others are some of the most important things he learned.  Teachers like Alice Brooks and Norman Powell, among many others, had an enduring influence on him.

To students who are thinking about becoming lawyers, Turner says, “They are going to have to pick something that’s enjoyable and fun to them.  It’s not just one shoe fits all.  There is all kinds of jobs in the legal field.  What is it that they ultimately think they’re gonna be after, and then tailor their education for it.”

Turner believes in the next generation of skilled workers and academics. “I believe some of our best minds are still in the washtub,” said Turner.

Turner received an undergraduate degree from Arkansas Tech University.  Then, he served for two years in the Army during the Vietnam War.  He came home and finished law school at the University of Arkansas and has been a practicing lawyer since April 1971. In his free time, he collects and restores retired military Jeeps.

Despite advanced degrees and running an established law practice, Turner says his greatest accomplishment is his children.  He said, “I’ve got two girls, and I just love ‘em.  They’ve both got integrity, honesty, work ethics. They love their country and their community.  What more could you ask for?”